Showcase your brand and learn from the best.

Every year, our line-up of fantastic expo keynote speakers grows and grows and this will continue for 2021.
We’re thrilled to announce the very first speaker for the Cardiff Expo 2021 – Jonathan “Jiffy” Davies will be partaking in an exclusive Q&A session during the networking breakfast and will no doubt share his experience of playing for Wales.

Introbiz Expo Cardiff 2021 is coming soon, so make sure you Book your FREE tickets today to see our amazing line up of keynote speakers, including professionals from The Apprentice, Dragons Den, rugby stars, football stars and top entrepreneurs. This amazing event is at the Cardiff City Stadium on the 3rd of June from 7.30am.

You can visit the gallery here

Jonathan Davies OBE is a former Welsh rugby player who played in the 1980’s and 1990’s. A goal-kicking backline player, he played his club rugby in Wales, England, and Australia. Jiffy has since become a television commentator for both codes and media personality in both the Welsh and English languages.

In 1974, Jiffy played rugby union for the very first time at Cardiff Arms Park – he was chosen for the West Wales under 12s team. He then started his career at amateur level with Trimsaran RFC and after developing at the club, he then signed for Neath and played at fly-half. After 35 games, Jonathan was selected to play for Wales as they took on England. He scored a try and a drop-goal before being named Man of the Match in a Welsh victory.

Jonathan then decided to play rugby league professionally and joined Widnes. He played in the centre position and went on to play in Australia in the summer of 1991. After Widnes got into financial difficulties, in 1993 he transferred to their local rivals Warrington. During his time in rugby league he represented both Great Britain and Wales, scoring a solo try in Great Britain’s last victory over the Kangaroos at the old Wembley in 1994 where he sprinted 50 metres to score in the corner out-pacing Australian full-back, Brett Mullins.

Although he left the field with a dislocated shoulder during the second half, his efforts in both attack and defence (which on the day saw him pull off two try saving tackles) saw him named as man of the match. However the shoulder injury would keep him out of the rest of The Ashes series (eventually won 2-1 by Australia) as well as prevent him from playing for Wales in a friendly against the Kangaroos in Cardiff. With the Rugby Football League splitting the Great Britain team into individual nations (Wales, England, Scotland and Ireland) from 1995, the test at Wembley would be the last time Davies would represent Great Britain in rugby league.

He was also named player of the 1993-94 season, winning the RFL’s Man of Steel award.

Davies again played in Australia when he signed with the newly-formed North Queensland Cowboys in 1995 before heading back to the world of rugby union.

Since 2004, Jiffy has hosted his own rugby themed chatshow, Jonathan, on S4C, usually before Welsh international matches. In 2015, he was awarded the OBE for his charitable services to people with cancer through his role as President of Cardiff’s Velindre Cancer Centre. He has raised the Centre’s profile as well as raising more than £10million.

You can book your tickets to see Jonathan speak here.

Ryan Jones is a former Wales international rugby union player who played at number eight, blindside flanker or second row. He has been involved in three Grand Slam wins, in 2005, as captain in 2008 and in 2012. He also captained the Ospreys from 2007 to 2010 and counts four Guinness Pro12 titles amongst his achievements.

Ryan Jones is a former Wales international rugby union player who played at number eight, blindside flanker or second row. He has been involved in three Grand Slam wins, in 2005, as captain in 2008 and in 2012. He also captained the Ospreys from 2007 to 2010 and counts four Guinness Pro12 titles amongst his achievements.

Jones made his international debut for Wales against South Africa in November 2004. He features in Wales’ 2005 Grand Slam-winning side. In January 2008, Jones was appointed captain of Wales by new coach, Warren Gatland. In his first Six Nations tournament as captain, he led his team to a second Grand Slam in four years. In April 2009, Jones was omitted from the 2009 British and Irish Lions tour to South Africa, before being called up to join the squad later, after Stephen Ferris pulled out with a knee injury. Within days, he was declared unfit to play by the medical team due to head injuries he had sustained in a previous Wales test match. Ryan Jones retired from rugby in 2015, on medical advice following a recurring shoulder injury.

Jones held the record as Wales most capped captain by overtaking the record of 28 caps held by Ieuan Evans.

Jessica knows that anything and everything is possible because she has created possibilities where there were none.  Overcoming adversity and hardship and starting two business that made six figures in their first year, all whilst raising her children and both of which were created for zero money, not even a penny, but from an idea and the self-belief she had the grit to make it happen.

Jessica knows that anything and everything is possible because she has created possibilities where there were none.  Overcoming adversity and hardship and starting two business that made six figures in their first year, all whilst raising her children and both of which were created for zero money, not even a penny, but from an idea and the self-belief she had the grit to make it happen.

Her job when you choose to work with her is to help you get to the end goal, the gold at the end of the rainbow.  To help you create and understand personal and business strategies that will give you balance. And we all know that feeling of spinning plates and not really knowing what to do to get the next step in your business.

Tony Morris is a sales expert and International sales speaker / keynote speaker, whose high-energy message leads individuals and organisations to incredible success.  He delivers over a hundred talks a year in his unique, energetic style to corporations and at events all over the Globe and has spoken in 25 countries. He has helped organisations like the Luxottica Group (Oakley, Ray ban, Sunglasses Hut etc.), Villeroy and Boche, IHG, Hitachi, Savills, to name but a few.

Having been in sales from the age of 18, Tony knows sales as well as he knows life. He can translate his hands-on experience into a coherent, compelling and exciting philosophy, which has made him an inspiring speaker and a powerful sales trainer to over 30,000 sales professionals.

Tony has interviewed the top 1% of sales professionals around the World, that he’s worked with and this has enabled him to understand what the best do differently, to outperform their peers on a consistent basis. Tony has created the methodology ‘K.I.L.L.E.R Sales: Inside the mind of a serial seller’ on the back of this research. This is his most popular keynote that he delivers around the world at sales kick-off conferences.

Tony shows companies how to increase their bottom line, build long-term customer loyalty, sales, and gaining referrals. Tony is about changing people’s beliefs and mind sets: “There is no such thing as failure, it’s all feedback”, he shares, “Learn from everything you do and keep getting better and better;”

His presentations are always interactive, motivating, fast-moving, informative, entertaining – even life-changing. Tony presents his ideas with a rare combination of fact, insight and practical advice that delegates can apply immediately for improved results.

Tony is an authority on the world of sales and has published 5 books: his first Coffee’s for Closers selling over 100,000 copies and becoming Amazon best seller for telemarketing.

Tony has created the perfect sales call DVD, which includes videos of him conducting LIVE calls on behalf of the delegates. He has written a column called Dear Sales Doctor for Business Connections (online Evening Standard), Winning Edge (the Institute of sales and marketing’s publication) and many more, where he answers salespersons’ most challenging questions.

Most notable for his rugby coaching successes with the Ospreys, Scarlets, Gloucester, Bristol and the Wales National Team, Sean Holleynow resides as television rugby analyst for BBC Wales Scrum V.

Sean was Head Coach for OspreysRugby where he spent nine seasons – over 250 games. He has worked with the British Lions, Grand Slam winners, All Blacks and Springboks including the likes of Shane Williams, Gavin Henson, Adam Jones, Ryan Jones, Tommy Bowe, Justin Marshall, Jerry Collins, Scott Gibbs andMike Phillips and many more. He has also worked as a Coach for the Welsh Rugby Union at all levels including the National Team in 2009.

Sean has also held several other high profile positions in the world of rugby. He was the longest serving and most successful Welsh Regional Coach helping the Ospreys to win 5 titles and 3 Heineken Cup Quarter Final places. In 2013, he was appointed Head Coach for Bristol Rugby where he stayed for 3 seasons culminating in promotion to the English Premiership after a record breaking stint for the club.

Seanhas now ventured into the business world with his own sport and media business, making use of his experiences and communication skills in keynote speaking, business mentoring and event hosting. He has developed a new education program for schools called iBroadcast and has recently become Director of an exciting outdoor adventure and events company called Man Up U.K. Ltd.

He retired from professional rugby 5 September 2013, only to be tempted back with the opportunity to play for London Irish in the Aviva Premiership. In May 2014 Gough rejoined Newport Gwent Dragons. He announced his retirement from playing in May 2015.

Franchising.
Be part of a growing community.

Would you like to connect people and host exclusive networking events in your town or city?
Find out more

Franchising.
Be part of a growing community.
Would you like to connect people and host exclusive networking events in your town or city?
Find out more
@Introbiz
Introbiz@introbiz·
3h 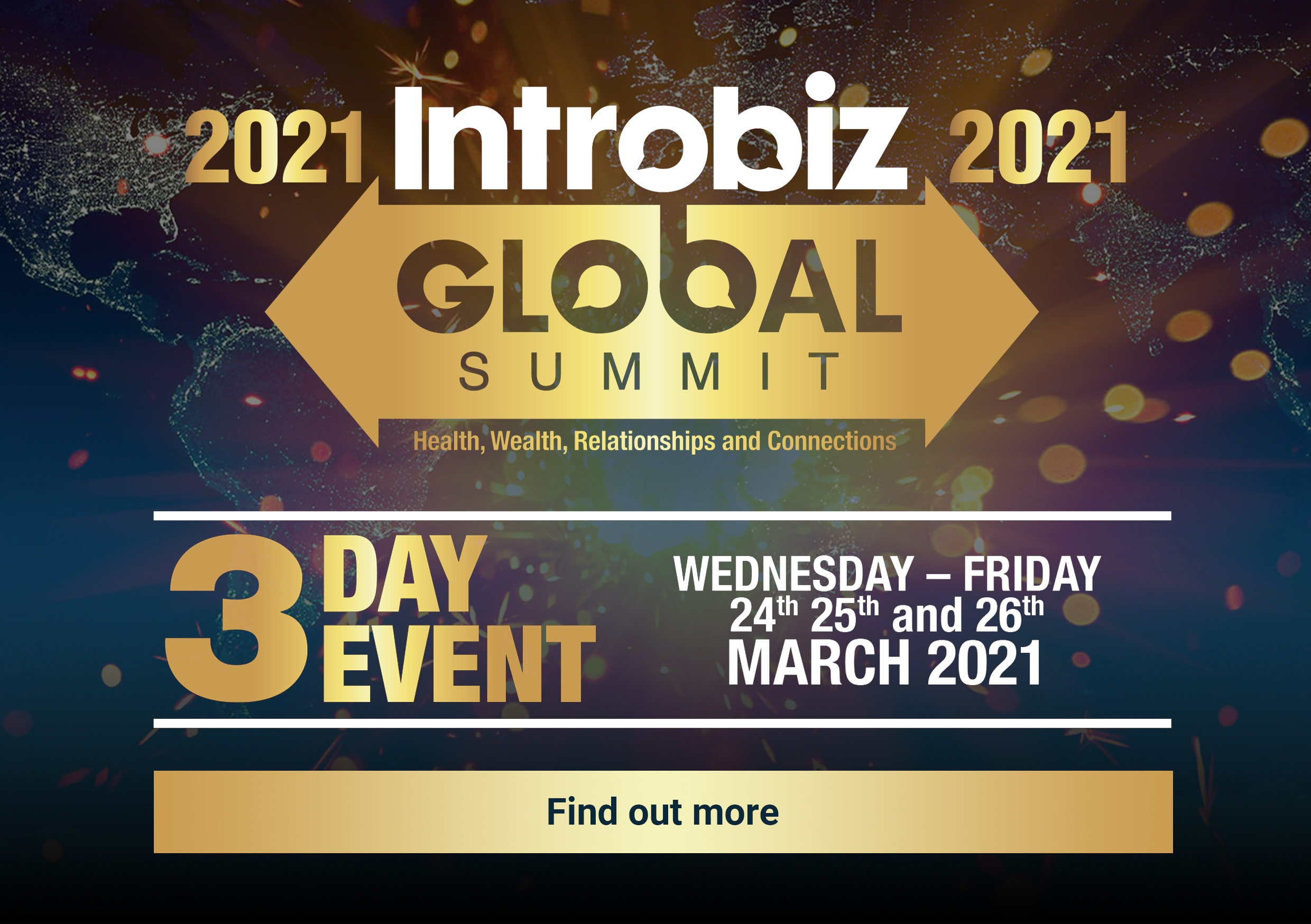